What is Ad Engagement?

Next
What is Ad Engagement?

Impressions, clicks, & conversions. Everywhere you look in digital advertising these metrics make their presence known. They form the basis of an attribution equation that is surprisingly more complex than these three data points make it seem. How often do we stop to ask if these are even the right metrics to use? Advertising is where marketing meets people. Whenever people are involved simple inferences somehow get more complicated.

“Start focusing on what really boosts the optimization equation, people!”

We intuitively think about optimizing ad campaigns in terms of a traditional and simple metric set that consists of impressions, clicks, and conversions. Many of us in the industry also implicitly sort this set of metrics from worst to best performance indicator. Ironically, clicks are a metric that receives plenty of undue attention when it comes to gauging performance. A common logic path goes like this, “well all things being equal, if we maximize clicks, we’ll get more conversions”. This is the dangerous inequality inference at work. In doing this we often fail to ask an obvious question, “Are all clicks created equally?” (does every click have the same probability of leading to a conversion?). When we think through the question the answer is obvious, “No, of course not.” The probability of a click leading to a conversion is dependent on numerous factors such as: what site the click is coming from, the time of day, and most importantly the psychological landscape of the consumer (this encompasses anything from the consumer’s current mood to their fiercely held brand loyalties). Essentially, today’s marketers attempt to translate a consumer’s psychological landscape into their position in a purchasing process. In advertising specifically, this is done to ensure delivery of a brand’s message at the optimal moment.

Where, exactly, someone is in the process is a difficult question to answer. But there’s a metric that we can use to get much closer to answering the question. How much time someone spend engaging with ads. Studies have shown that the amount of time a person spends interacting with an ad is a better predictor of conversions than impressions or clicks. To take this another ironic step forward, total impressions is a better predictor of conversion than clicks. For some reason, perhaps execution simplicity or behavioral residue from search engine PPC advertising, too many optimization strategies still focus on clicks.

Focusing on the engagement time in an ad changes the optimization equation because it links the impact of the creative to the impressions, clicks, and conversions. The logic is simple: where there is more time engaged with an ad, there is more consideration and more intent to purchase. Combining this logic with the insight that total time engaged with an ad has relatively exceptional predictor strength for conversions it’s clear that we need an update to our core set of metrics. 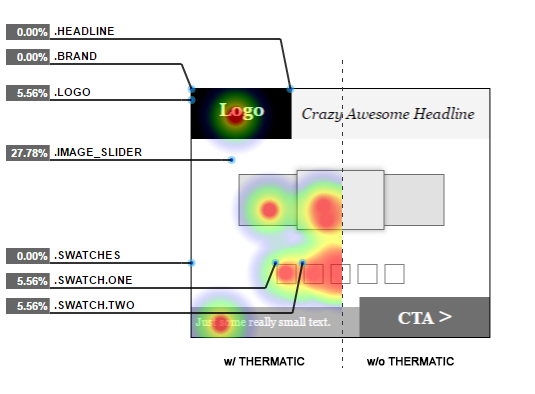 Easier said than done… how do we optimize for engagement time? Well, the first step is effectively measuring time engaged in ads. Transitiv’s Thermatic™ technology measures not only the time engaged with a creative, but also which elements of the creative received engagement, in terms of both clicks and hovers. The addition of engagement to the measurement dimensions of ads is astounding because it naturally brings the creative into the optimization equation in a way that traditional metrics don’t. Presenting this arguably complex data in a visually intuitive form is what makes it all work seamlessly.

Start focusing on what really boosts the optimization equation, people!